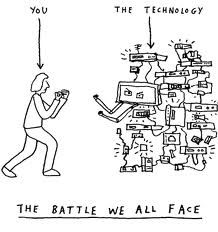 study, which resulted in an estimation that over 800 million people all over the world are at serious risk of being made redundant by technology within the next decade. For some, this is a known threat and has caused a level of uncertainty for a while now, especially in places like Silicon Valley.

Take the grocery store for example; what is going to happen to your friendly local cashier when there is technology and artificial intelligence advanced enough to scan your items, take your money and give you your change and receipt? He or she will be out of a job and replaced by a machine faster and more efficient than him or her. What about your mail man/woman? What happens to him/her when drones become the norm for shipping packages and delivering mail, completing the process in a more timely manner than humanly possible?

Though Ireland’s 5.8% unemployment rate may actually seem like a good and promising statistic, if you remove some of the layers, it becomes evident that this statistic does not reveal the whole truth and is not reflective of the bigger picture. This stat does not include people trying to make ends meet by working part time. The country’s unemployment rate is one of the highest in Europe and even so, does not accurately depict the level of people who struggle to make ends meet. This is expected to increase as technology makes many basic jobs redundant and leaves a real imbalance of supply and demand in terms of skilled workers and the workforce in general.